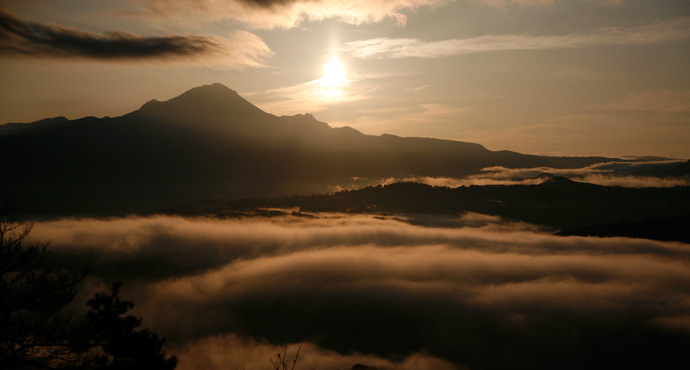 Once Japan had been consolidated as a single nation around the imperial family, the country's ancient myths and history were gathered together in the Kojiki in the early eighth century. Kojiki is the oldest extant chronicle in Japan, and one third of the stories are said to be set in the San'in region. In fact, you will find the mountains, beaches and the oldest shrines associated with the episodes in Japanese mythology, such as Mt. Daisen regarded as the God itself, Hakuto Beach (White Rabbit Beach) with the story of Okuninushi and a white rabbit. There is also Izumo Taisha (Shrine Whence The Clouds Come), one of the most ancient and important shrines in Japan, where the gods gather in October to discuss the coming year's marriage, deaths and births.

You will also see the Mukibanda remains, one of the largest Yayoi-Period ruins in Japan, and the Kamo Iwakura ruins and Kojindani ruins, where numerous bronze swords and bell-shaped vessels were found. These remains provide evidence that the great authority once has existed in the San'in region. The ancient civilization has flourished here in Sanin, because of the natural blessings and the geographic closeness to China and Korea. Chinese and Korean ancestors introduced the processing method of irons, which greatly improved agricultural productivity.

In Shinto religion, the gods reside in all things, but there are natural places considered to have an unusually sacred spirit about them, and are objects of worship. They are frequently mountains, trees, unusual rocks, rivers, waterfalls, and other natural edifices. The idea of symbiosis with nature, of course, had strongly resided in the everyday life of the Saniners. San'in's culture and climate has fascinated many people. Shigeru Mizuki, for example, has uniquely expressed the blur boundary between humans and spirits in Japan in his manga series Ge Ge Ge no Kitaro. Lafcadio Hearn (Yakumo Koizumi), who had lived in Matsue City, was fascinated with the culture and had collected Japanese legends and ghost stories.

One of the three strange festivals in Japan!?

The Statue of Oni

It is said that Mizoguchi area of Houki town has the oldest legend of Oni.

One of the most ancient and important shrines in Japan

Iwami Ginzan Silver Mine and its Cultural Landscape was added to the World Heritage List in 2007.

The ancient culture of Shimane is introduced based on three themes ; the Izumo Grand Shrine, the Izumo fudoki, and bronze implements.